The housing market has carried forward its year-end momentum.

According to the Census Bureau, on a seasonally-adjusted, annualized basis, January’s Single-Family Housing Starts crossed the half-million unit marker for the second straight month.

This hasn’t happened in close to 2 years and is the latest in a series of strong data that suggests the beleaguered housing market has turned a corner.

Although single-family starts slipped 1 percent from December, January’s annualized 508,000 figure represents a 16% spike from January 2011 and is the second-highest reading since April 2010 — the last month of 2010’s federal home buyer tax credit program.

A “housing start” is a new home on which construction has started.

In hindsight, though, we should have seen this coming.

Earlier in the week, the National Association of Homebuilders announced that homebuilder confidence had climbed to its highest point since 2007 amid builder reports of rising sales volume and the most foot traffic from buyers in more than 4 years.

Builders are building and buyers are buying.

Meanwhile, as another sign of housing market strength, the Census Bureau reports that, in January, Building Permits moved to a multi-year high as well. Permits issued for single-family homes in January rose 1 percent from December, a statistic that suggests housing will continue its run through the spring season, at least.

86 percent of homes break ground within one month of permit issuance.

It’s a good time to be a home buyer. Mortgage rates and home prices are low. Housing market momentum, however, is building. If you’re on the fence about whether to buy a home , ask your real estate agent for additional market information.

The cost of home-ownership may never be as low as it is today. 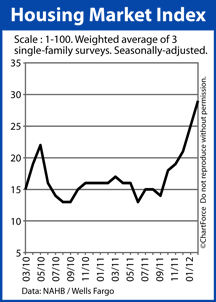 New construction buyers , look out. The nation’s home builders are predicting a strong 2012 for new home sales. It may mean higher home prices as the spring buying season approaches.

For the sixth straight month, the National Association of Homebuilders reports that homebuilder confidence is on the rise. The Housing Market Index climbed four points to 29 in February, the index’s highest reading since May 2007.

The Housing Market Index is now up 8 points in 8 weeks. The last time that happened was June 2003, a month during which the U.S. economy was regaining its footing, much like this month. It’s noteworthy that June 2003 marked the start of a 4-year bull run in the stock market that took equities up 54%.

The NAHB’s Housing Market Index itself is actually a composite reading. It’s the end-result of three separate surveys sent to home builders monthly.

The association’s questions are basic :

Most notable of all of the statistics, though, is that the nation’s home builders report that there are now twice as many buyers setting foot inside model units as compared to just 6 months ago.

This data is supported by the monthly New Home Sales report which shows rising sales and a shrinking new home inventory.

Because of this, today’s new home buyers  should expect fewer concessions from builders at the time of contract including fewer price breaks on a home and fewer free upgrades. Builders are optimistic for the future and, therefore, may be less willing to “make a deal”.

This spring may mark the best time of year to buy a new home. 60 days forward, it may be too late.

The U.S. economy continues to show signs of a rebound.

This is big news because Retail Sales accounts for close to 70% of the U.S. economy.

In addition, consumer confidence is rising.

In a separate, joint report from the University of Michigan and Thompson Reuters, it was shown that consumer attitudes toward the economy and the future are improving, primarily the result of recent job gains.

The Survey of Consumers posted its highest value in 12 months.

It is not a coincidence that Retail Sales and consumer confidence both made multi-month highs — the readings are more than loosely linked. As consumers feel more confident about the economy and their personal prospects for the future, they’re more likely to spend money on goods and services, which leads to an increase in consumer spending.

For the housing market, the ramifications are two-fold.

First, from the financing side, an expanding economy is linked to rising mortgage rates. This is because Wall Street tends to chase risk in a growth economy and the bond market offers little in the way of risk. As demand for bonds drops, then, mortgage rates rise.

So, as more buyers enter the market at a time when the national home supply is shrinking, the supply-demand balance in housing is shifting toward the sellers. This creates price pressures and should lead to higher home valuations.

If you have plans to buy a home in 2012, the best time to buy may be now. Today’s mortgage rates are low and so are the home prices — a combination that’s unlikely to last.

Economists believe the strength of the 2012 housing market will be closely tied to jobs. If they’re right, the housing market is ripe for a boost. It spells good news for home sellers and may mean the end of bargain-basement prices for buyers.

Since peaking in mid-2009, the number of U.S. workers filing for first-time unemployment benefits has dropped 44 percent. Over the same period of time, the U.S. economy has added more than 2 million jobs and the national Unemployment Rate is down more than 1 percentage point to 8.3%.

Employment’s link to the housing market is both economic and psychological.

To make the economic link is straight-forward. A person with a job earns verifiable income and such income is required in order to be mortgage-eligible. For conventional and FHA purchase loans, for example, mortgage lenders want a home buyer’s monthly income be more than double his monthly debts.

For the formerly unemployed that have since returned to work, having a full-time income makes buying homes possible. It also supports higher home valuations nationwide because home prices are based on supply-and-demand. All things equal, when the number of buyers in a market goes up, prices do, too.

The psychological connection between housing and employment is a tad more complicated, but every bit as important. It’s not just out-of-work Americans that don’t look for homes — it’s fearful Americans, too. People with concerns about losing a job are just as unlikely to shop for homes as people actually without a job. The same is true for people unsure of their prospects for a better-paying job, or their own upward mobility.

A recovering job market can lessen those fears and draw out buyers — especially those who face a loss on the sale of an “underwater” home.

The Initial Jobless Claims rolling 4-week average is at its lowest level since 2008. Fewer Americans are losing jobs, and more are finding permanent placement.

It’s one more reason to be optimistic for this year’s housing market. 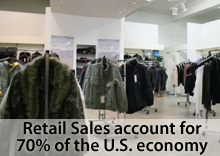 Early in the week, Greece reached a deal with European Union leaders to secure additional financial aid. By Friday, however, the deal was in doubt, as the EU leaders declared that the Greek Parliament would have pass new austerity measures before the aid would be released.

Austerity measures have been unpopular in Greece, giving rise to riots among citizens and resignations among politicians. Markets responded to the potential undoing of the debt deal by seeking safety in bonds — including U.S. mortgage-backed bonds.

The Greek debt default story has helped fuel low mortgage rates. Once a final deal is reached, mortgage rates are likely to rise.

For now, though, mortgage rates remain at all-time lows.

This week, data returns to the U.S. economic calendar.

Greece will still be in play, but the health of the U.S. economy will determine in which direction mortgage rates will go. There are two inflation reports due — the Consumer Price Index and the Producer Price Index.

The former is a “cost of living” indicator for U.S. households; the latter measures the same for business. Inflation is bad for mortgage rates so if either report comes in unexpectedly high, mortgage rates are likely to rise.

The same is true for Tuesday’s Retail Sales report.

Retail Sales account for close to 70% of total U.S. economic activity. An unexpectedly strong Retail Sales figure will suggest that the domestic economy is improving and that, too, would pressure mortgage rates up.

If you’re shopping for a mortgage, or floating one with your lender, consider locking in this week. Mortgage rates don’t have much room to fall and there’s much room to rise.

I am a longtime resident of Northern Virginia, an Annandale High School alumnus, and a graduate of Wake Forest University in NC. After playing professional football for a few years I returned to Northern Virginia to raise a family with my wife. I am the father of three girls and I treasure the relationship I have with my family Read More…

Sign up to receive mortgage articles straight to your inbox!